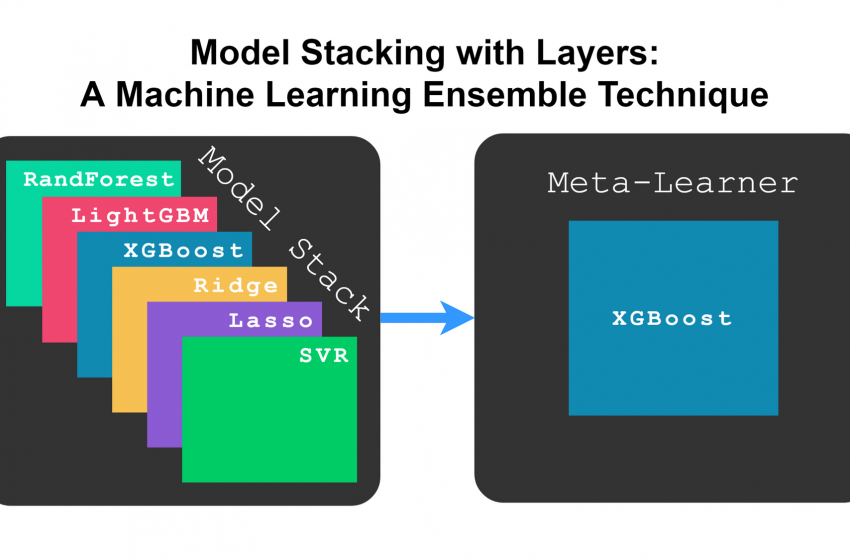 This article was first published by IBM Developer at developer.ibm.com, but authored by Casper Hansen. Here is the Direct link.

Sometimes you discover small tips and tricks to improve your code and make life easier for yourself, e.g. better maintainability, efficiency etc. — well this is one of those improvements to your machine learning, except it’s essential and takes an extra thought to implement.

The goal is to introduce you, the developer, to stacking in machine learning. Using your own models, you will learn how to apply stacking to your own datasets. Follow this article and get better results — it’s that simple.

You should at least be familiar with overfitting, underfitting and cross-validation to read this article.

What is Model Stacking?

Stacking is the process of using different Machine Learning models one after another, where you add the predictions from each model to make a new feature.

There are generally two different variants for stacking, variant A and B. For this article, we are focusing on variant A, since this seems to get the better results of the two variants, because models more easily overfit to training data in variant B. This is likely also the reason why practitioners use variant A, although it does not eliminate overfitting.

Please note that there is no correct way of implementing model stacking (David H. Wolpert), because model stacking only describes the process of combining many models with a final generalized model. There exists ways to implement model stacking, some of which has been proven to work well in practice. This is why we explore variant A.

Model stacking should always be accompanied by cross validation, to reduce overfitting models to training data. This is common practice – read more here.

Model stacking will seem like a simple technique to improving your results, when you understand what happens inside the algorithm. Though, there is many components interacting, and keeping track of all of them can be quite difficult, especially when first learning this concept. For you to fully understand the algorithm, I created a step-by-step image and description, such that it is easier to understand.

For starters, when doing model stacking with cross-validation, we require three parameters: a Training dataset, Holdout dataset (validation dataset) and a list of models called models_to_train.

Now, let’s put figure 1 into text, to actually explain what goes on! Later on, you will encounter a real example in Python.

Notice that we use one model to predict each part of the total training dataset; we predict one fold at a time, with a different model each time.

Great, we have some stacked machine learning models, but how can we use them for anything? The next step is taking the new training and holdout dataset and use them as input in the next layer.

Stacking machine learning models is done in layers, and there can be arbitrarily many layers, dependent on exactly how many models you have trained, along with the best combination of these models. For an instance, the first layer could boil down to learning some feature that has great predictive power, while the next layer might be doing something else, like reducing noise.

We put models stacks in layers, and usually with a different purpose. At the end, we get a final dataset, that we feed into a last model. The last model is called a meta-learner (e.g. meta-regressor or meta-classifier), and its purpose is to generalize all the features from each layer into the final predictions.

Below is an example, where each level represents a new layer in our total pipeline, when applying model stacking (there is a switch between layer and level, but their meaning is the same). The example given is only with two levels, where level 2 is the final model that gives the final predictions, which is the output.

If you wanted to add more layers, we could just add another level after level 1 and make the meta-learner level 3. If we were to increase the numbers of layers, level 2 would be another round of model stacking of M models, just as in level 1. The meta-learner is always present in the last layer, hence why we insert a new level before the meta-learner.

To summarize, we produce new features by different models stack, which is combined in a new dataset to make final predictions at the end. People sometimes combine other methods in these model stacks, such as feature selection or normalization, but we will not explore these other methods here.

What is a Stack of Models?

Quite literally, you define a stack of models for each layer, and you run the first model from the first layer, all the way down to the last model in the last layer, while making predictions between levels. These stacks of models could be any type of model, e.g. we could have a stack with XGBoost, Neural Networks and Linear Regression.

The image below helps realizing how models are stacked in layers, even though it is not as specific as the one I provided earlier.

Why Should You Use Stacking?

Throughout this article, the promise of better results have been mentioned a couple of times. Let’s justify how and why we get better results when using model stacking.

1) Model stacking is used amongst competition winners and practitioners – and the reason for why is simple. Your meta-learner generalizes better than a single model, i.e. it makes better predictions on unseen data, than just a single model. It’s that simple.

2) A good and older paper on this topic is Stacked Generalization by David H. Wolpert (1992). Wolpert argues that model stacking deduces the bias in a model on a particular dataset, such that we later on can correct for such bias in a meta-learner.

3) Before model stacking became popular and more widely used, a technique called Bayes Model Averaging (BMA) existed. In such a model, weights were the posterior probabilities of models – but instead, empirical evidence by Bertrand Clarke has shown that model stacking with cross validation out-performs BMA, while being robust, because model stacking is less sensitive to changes in a dataset.

I think the argument you should pay most attention to, is the first point – everyone uses model stacking to get better results. But if you are looking for an explanation of why it works, I would read the paper by Wolpert.

Step By Step: Code For Stacking in Python

Now for what most developers would consider the fun part. The part where we apply what we just learned from reading about what model stacking is, and how exactly it improves the predictive power. GitHub repository with full code.

The first thing to do, in a Machine Learning project, is finding a dataset. For this illustrative example, we are going to be using a toy dataset (one that requires no data cleaning or transforming).

Before we can import a dataset, we need to import some of the basic packages for handling datasets.

The next step is to load the dataset into a Pandas dataframe, such that we can index and inspect the dataset easily. We simply provide the load_boston function from sklearn, and we input it into the function as seen below. This will return a dataframe containing all the features and samples in the Boston Housing Dataset.

After loading the dataset, we typically want to inspect it and learn what the features means. This task is omitted here, but I will leave 5 samples of data, along with the meaning of each feature in the dataset means here. You can also find a description of all these features here.

Inspecting the first five rows in our dataset, we can see some values. We don’t know what they mean yet.

1-13 is our input and 14 is the output which we are trying to predict as precisely as possible, given an unseen test dataset.

Before we start doing model stacking, we want to optimize the hyperparameters for each algorithm for a baseline comparison. This is commonly done by a searching algorithm, for an example, scikit-learn offers a grid search and random search algorithm.

If we cannot exceed the baseline predictions from the baseline models, then we should simply not bother trying model stacking. Sometimes though, model stacking cannot improve results by that much, either because of a low number of samples, or not complex enough data.

Before we start stacking, we split the dataset df into four variables X_train, X_test, y_train and y_test. Any variable named X is typically our input data, while y is what we want to predict (the output data).

I made a function for doing hyperparameter tuning. This function gives us exactly what we want; the best model, the predictions and the score of the best model on the test dataset. It uses imports from the scikit-learn package (sklearn), which makes it easier to run the grid search algorithm.

As parameters to the function, we can just pass in our data, a model and different hyperparameters for tuning.

Next, we define the hyperparameters for tuning, along with the models. We use Random Forest, LightGBM and XGBoost in the following code, since they usually perform the best. First, we import and instantiate the classes for the models, then we define some parameters to input into the grid search function.

Now that we have defined all the models and hyperparameters for tuning, we can simply input our data into the function defined earlier.

Inspecting the results, we finally get to see which models performed the best, by running the following lines of code.

As we can see from the results, XGBoost clearly outperformed the two other algorithms, therefore we will use XGBoost as the meta-learner.

We have a score to beat; the XGBRegressor score of $0.8954$. The point of stacking, is that we can improve results. Let me show you how to make it happen.

After doing some research on existing packages, I found pystacknet and mlxtend. For this article, I went with mlxtend, because it integrates nicely with scikit-learn, which defines a great API that XGBoost, LightGBM and other packages follow.

Now that we have defined all our models, we can begin improving our results by stacking some models! As we can see here, we defined two levels, where the first level has 6 models, and the second level has the meta-learner.

Note: XGBoost/mlxtend has a bug when trying to mix the packages. That is why we edit the names of the columns of the X_test to $f0$, $f1$, etc. – XGBoost internally renames the features of X_train, and if we don’t provide the exact same names, it will not run. We also use shuffle=False and random_state=42 for the sake of reproducing the same results displayed in this article.

Finally, after solving some small tasks throughout the code, we get to a result.

About 0.01 better in the $r^2$ score – which makes sense. The dataset used here is highly linear, which means it’s really hard to capture any patterns that the baseline algorithms couldn’t capture already. But it still demonstrates the effect of stacking, which is better results – even on highly linear datasets.

The possibilities for optimizing results for more complex datasets are much greater, and if you want to compete on Kaggle, I suggest picking up a version of model stacking. This is a rather simple case; on Kaggle, you will see stacking of 100+ models in a single layer. Gilberto and Stanislav on Kaggle optimized 33 models from scratch and combined them in a model stack to win the first place award of $5000. This was some years back, today there are prices of up to $1.000.000 for detecting Deepfakes.

The unreasonable effectiveness of complex numbers in... 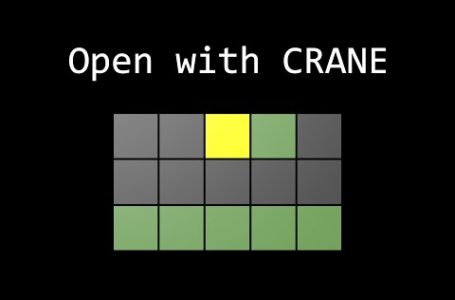